Want to change your tax residence and obtain a second passport? Immigrating to Panama is the best choice!

Panama visa programs providing for residence permit in the country are very popular with the citizens of many different states. Lax immigration requirements, the economic progress that Panama has been showing over the last few decades, warm climate, good business perspectives, and stable legal frameworks make the country highly competitive in the immigration market. Today Panama matches best-developed countries in many respects while offering the same quality of living for a smaller price. 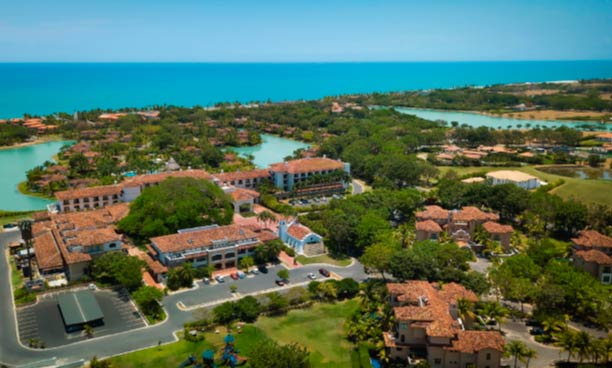 If you have already enquired into the issue of changing your domicile, you know that quite a number of world countries welcome foreigners to acquire their residence and citizenship.

Those who want to move to another country will have different reasons for that. Some find their other half in a foreign country and want to start their family life in the spouse’s homeland. Others are unhappy about the climate at home and look for environmental conditions that would be a bit more comfortable. Still others feel the taxes they have to pay at home are too high and they look to relocate to a state with a more favorable taxation regime. Some simply want to have more freedom in moving around the world. Of course, there will be other reasons why people want to leave the country of their birth and move somewhere else.

At the same time, obtaining a passport in a new country means becoming a citizen of this country. Far from every country in the world easily grants citizenship to foreigners. For instance, the only chance to become a citizen of Monaco is to be born to Monaco parents. All countries that do grant citizenship to foreign applicants will have some requirements that the applicant must fulfil in order to qualify for citizenship. Residing in the country for a certain period is the most widely spread of such requirements, however, there are always other conditions and they may appear hard or expensive to meet in some cases.

Anyway, the demand for a second passport is constantly growing as more and more people from different parts of the world wish to acquire a “second home” by obtaining residence permit in another country. The modern world certainly lacks stability, and finding a place to resort to in case anything happens in your home country is a very pragmatic thing to do.

Let us take a quick look at the requirements that some popular immigration destinations put forward.

All European immigration program deserve attention without doubt. All of them have their advantages but neither of them is free from some disadvantages, too. If we take the Malta “Citizenship for Investment” program, we will see that a Maltese passport gives visa-free access to 182 countries of the world. At the same time, the required investment amount starts at 900,000 euros, which is certainly not a petty sum of money at all.

To make use of this program you will have to reside in Malta for at least twelve months. In addition, there are annual quotas, and when the number of immigrants applying for Maltese citizenship on the “Citizenship for Investment” program reaches 1,800 people, the program is suspended until the beginning of the next year.

You can also become a citizen of Malta via ‘naturalization’ but this process consists of several stages and requires a much longer time.

Cyprus also has a Citizenship for Investment program but the maximum number of applicants who can use it is set at seven hundred a year. Besides, the minimum required investment with this program is 2,000,000 euros. On top of that, you will also have to donate 150,000 euros to two Cyprus state funds, and this money is not recoverable.

After all the investments have been made and confirmed with the state authorities, it takes about eight months to obtain a Cypriot passport. A citizen of Cyprus enjoys visa-free access to 173 countries.

The Caribbean basin countries also offer citizenship for investment to foreign nationals. In their cases, the required investments are considerably lower and the terms of acquiring a Caribbean passport are considerably shorter. At the same time, most states in this region require irretrievable donations that may sometimes exceed US$ 100,000. And these donations have to be added to the necessary investment required under the immigration program.

Advantages of Panama as a country of residence

Panama is a truly inviting country to immigrate to as it offers to newcomers several benefits that are unavailable elsewhere. The first advantage of Panama is the wide range of different immigration programs that it has. Every such program is designed for a certain category of foreigners, and almost any person can find the program that suits him or her best. Neither of Panama immigration programs involves any irrecoverable donations. Some other Panama’s advantages include the following:

Below you will find information about three most popular immigration programs of the dozens that Panama offers.

Obtaining an “Economic Investor” visa will make you eligible for permanent residency in Panama. After holding the permanent resident permit for five years, you are entitled to apply for full citizenship. This visa program requires investment of minimum US$ 300,000 into the Panamanian economy.

You can make this investment in three different ways:

The real estate you buy has to be worth not less than US$ 300,000. The same goes for the bank account: the deposit should be of at least US$ 300,000, and you have to keep the money in the bank for three years before you can use it again. Your combined investment also has to amount to the sum indicated above. You can find more information about the Economic Investor visa program by clicking here.

If you purchase the property described below, you will qualify for Economic Investor immigration program.

A luxury villa in Buenaventura resort in Panama

We invite you to consider purchasing a villa in a luxurious gated resort in Panama called Buenaventura (which translates into English as ‘good luck’).  This top-class beach resort is located in Cocle province, 10 kilometers (6 miles) away from the town of Rio Hato and in a 90-minute drive from Panama City.

Bristol Buenaventura hotel is placed in the very center of the resort. Tourists from all over the world love staying in its luxury suites and enjoying the fine cuisine that the hotel offers. There is also an ocean beach with all the necessary facilities including a large swimming pool right on the shore. What the resort is probably most famous for is the 18-hole golf course designed by the most rigorous standards and regularly hosting world tournaments.

Buenaventura resort is made of eight residential quarters, each of which has houses, or villas, built in a certain architectural style. Some of the quarters are still being developed and a few unoccupied construction sites are still available for purchase.

However, we would like to offer you a deluxe villa that has been already constructed. It is located in the “Paseo de las Casas” living quarter and the total estate area is 9,000 square meters (over 10,000 square yards), which is quite a large piece of land. Around 40% of the area is taken by tropical rainforests with walking paths running through them.

The villas in this residential area are built in the Hispanic colonial style, and six of them have already been sold as of this day.

There is also an electric generator and a parking area for two cars outside. 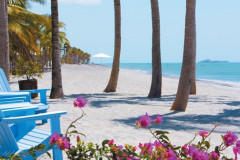 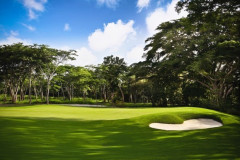 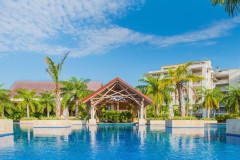 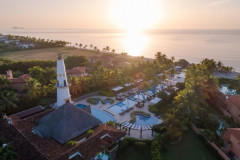 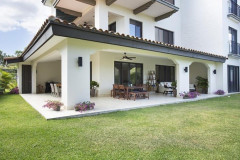 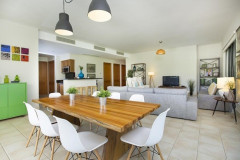 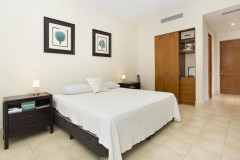 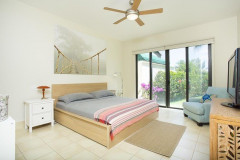 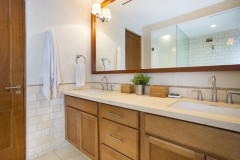 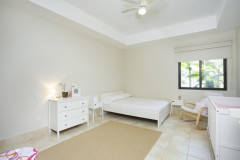 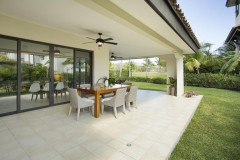 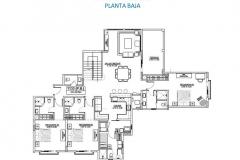 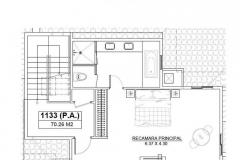 Today is the best time to purchase property in this popular resort area on the Pacific Ocean shore. Wealthy foreigners love buying real estate in such neighborhoods because they provide for a quiet life away from the fuss and noise of big cities.

We would like to stress that the best purchase can be made before the information about a newly build VIP house or villa becomes publicly available through advertisement media. We want you to be the first who learns about best offers on the Panamanian real estate market.

You can enquire about the price of this piece of property or learn about more options by writing to us to info@offshore-pro.info. We will be happy to answer all your queries.

We would also like to mention two more Panamanian visa programs that allow permanent residence in the country and will eventually lead to the full citizenship if you wish to apply for it.

The “Friendly Nations” visa program is meant to attract citizens of fifty world states that have established most friendly relationships with Panama. Citizens of these states are given the easiest access to Panama. The application procedure for them is as simple as it can be and the investment requirements are quite lax. Thus, the program applicant has to have only US$ 5,000 in a Panamanian bank account and in addition to that do one of the following:

By following this link you can find the list of Panama’s fifty friendly nations as well as more information about this immigration program. If you come from one of the countries found on the list, we highly recommend that you consider this visa program before you turn to others.

Finally, there is the “Pensionado” visa program that is designed to attract foreigners with a stable income to Panama. Despite its name, this immigration program is not aimed at pensioners only. Any person over eighteen years of age from any country of the world can apply for the program if he or she can show to the Panamanian immigration authorities a source of guaranteed monthly income of at least US$ 1,000. Pensioners are the category of people who will have a stable monthly income in the first place, hence the name of the program.

The Pendionado program has been in place since 1987 and a large number of USA and Canadian citizens in particular have been making extensive use of all the benefits that it has to offer. The average monthly allowance retirees in these countries receive is higher than a thousand dollars a month, and the climate in Panama is much better than that in the middle and northern parts of the United States and the whole of Canada.

This program has an interesting variation for those who would like to settle in Panama for good and live a simple life in this beautiful country. If you purchase real estate worth US$ 100,000 in Panama, you will have to demonstrate that your guaranteed monthly income amounts to US$ 750. This will be enough to acquire a permanent residence permit in Panama.

You can learn more about the Pensionado visa program by following this link. If you live in a country that has a hard currency and are closing on retirement age (or already retired), we highly recommend that you look into this Panama immigration program closely before you consider any other of them.

Would you like to learn more about purchasing real property in Panama or acquiring residency there or any other issue related to moving to Panama? If you would, please contact us via e-mail: info@offshore-pro.info and request a free consultation with us. We are always happy to help.