It is good to know that there are several investment options that allow obtaining citizenship of Antigua and Barbuda in the Caribbean basin. Since quite recently, it has become possible to donate US$ 150,000 to the West Indies University fund thus economizing seriously on acquiring Antiguan citizenship for a large family. Besides, this option also has incentives for University students.

The tropical climate and the relaxed ‘beach’ lifestyle on the islands of Antigua and Barbuda attract visitor from all over the world and North America in particular. English is the official language in the country and the tourists can submerse into the authentic local culture, try exotic local foods, and dissolve in the amazingly beautiful nature of the islands.

Quite a few tourists to Antigua and Barbuda love the country so much that they buy residential accommodations there and acquire Antiguan citizenship. The good news is that it is possible to become a full citizen of Antigua and Barbuda in exchange for a donation or refundable investment and that the price is low if compared to ‘citizenship by investment’ opportunities that other countries offer.

Theoretically, you could become a citizen of the country via naturalization. But this would entail the necessity to actually live there for several years permanently before you can apply for citizenship. If you use the Antiguan ‘citizenship by investment’ program, however, you can acquire full citizenship within four to six months only and the time you will have to spend in the country is five days per year.

Technically, there are many investment options when it comes to ‘buying’ citizenship of Antigua and Barbuda. Essentially, however, there are two possibilities to choose from. Frist, you can make a non-refundable donation. The required donation amount is comparatively small but you will have to say goodbye to the money anyway. Second, you can make an investment, for example, into real estate or business in the country. This investment is potentially returnable: after holding the property or the business in your possession for five consecutive years, you are entitled to sell it back while retaining the citizenship of Antigua and Barbuda. On the other hand, the required investment amount is several times larger than the amount of the donation. The choice can be rather hard to make as every option has its own advantages and disadvantages.

Lately, there appeared a new opportunity that should be interesting to those who have large families and would like to obtain Antiguan citizenship for all family members. Namely, it is a possibility to donate US$ 150,000 to the West Indies University fund thus acquiring passports of Antigua and Barbuda for everybody in your family including children and both spouses’ parents.

Citizenship of Antigua and Barbuda: a US$ 150,000 donation to the University fund

In second half of last year, Prime Minister and Finance Minister of Antigua and Barbuda Gaston Brown (see the photo below) announced the formal launch of a new ‘citizenship by investment’ initiative. 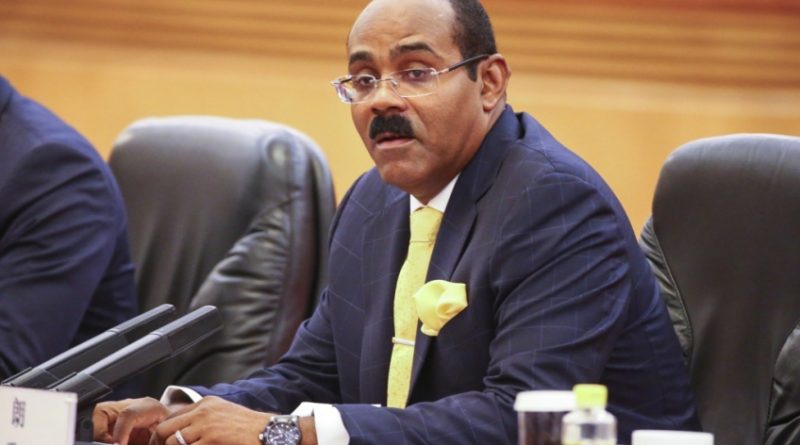 According to the politician, the initiative is aimed at raising funds for the construction of a new University of West Indies (UWI) campus that will be located in the Five Islands district on the island of Antigua.

The announcement of the new program was made possible after the Antigua State College Director and the Antiguan Prosecutor General had inspected the project proposal and expressed their approvals.

It was admitted that the construction of a new University campus in Antigua and Barbuda is necessary indeed. According to the Government’s estimations, after five to ten years of operations, the new campus will start making a considerable contribution to the country’s economy.

The idea of building a new campus had been discussed for a few years. Initially, the Prime Minister had been considering the introduction of a new tax that would help finance the project. Luckily for the people of Antigua and Barbuda, their Government has been able to come up with a better proposal.

It would be interesting to note that when Prime Minister Brown first announced his plans to introduce a new donation option for potential foreign investors, the local mass media expressed doubts about its expediency.

The journalists assumed that a foreign applicant was unlikely to choose this option as the amount of the required donation was fifty percent more than the amount of a ‘normal’ donation to the National Development Fund (NDF). A single applicant or a family of four will be eligible for acquiring full citizenship of Antigua and Barbuda in exchange for a non-refundable donation of US$ 100,000 to the NDF.

The prime Minister’s office had to clarify the issue for the journalists. Its representative explained that the new program was aimed at applicants with large families. Those will find the price of US$ 150,000 attractive as the required donation amount for a family of five is US$ 125,000 plus another US$ 15,000 thousand is due for each extra family member. Thus, a family of six or more can really benefit from this proposal as the possibility for one family member to attend the University of West Indies for free during one year should also be taken into account.

In addition to that, Prime Minister Brown has provided a serious incentive to the immigration agents that should make them actively promote this product in the international markets. He promised that “Immigration agents who persuade foreign nationals to apply for Antiguan citizenship by use of this donation option will receive a commission of US$ 30,000”. This is an attractive commission indeed, as it constitutes 20% of the overall amount of the donation.

Citizenship by investment Government program in Antigua and Barbuda: some statistics

When the Government of Antigua and Barbuda doubled the price of the citizenship acquisition back in 2016, the number of applications dropped severely. Prime Minister Gaston Brown attributed the decrease to the tough competition in the region. Other Caribbean states also offer citizenship by investment opportunities and their prices are most often lower than US$ 200,000 in a non-refundable donation.

When the minimum required donation amount was returned to the initial level of US$ 100,000, the number of applications started growing again. It was a bit lower than 300 in 2016, a bit higher than 300 in 2017 rocketing to nearly 700 in 2018. We have the statistics only for the first half of 2019 thus far – 241 applications – but the previous year is expected to match 2018 in the number of applications for citizenship as two thirds of all applications in 2018 were made in its second half. According to Government officials, the ‘citizenship by investment’ program brought close to one hundred million US dollars to the national budget of Antigua and Barbuda in 2018.

You can bring the whole of your family with you to Antigua and Barbuda and acquire citizenship of the country for yourself, your spouse, your children, and their grandmothers and grandfathers. You should be especially interested in the second passport acquisition opportunity described above if you have a large family and your children are approaching the university age. University of West Indies provides world-class education and it has English as the language of instruction.

We will be happy to assist you in acquiring second passports of Antigua and Barbuda for the whole family. Please contact us at info@offshore-pro.info and we will put you through to one of the licensed immigration agents on the islands. Please also use the same address to ask us any questions related to the matter without any hesitation.